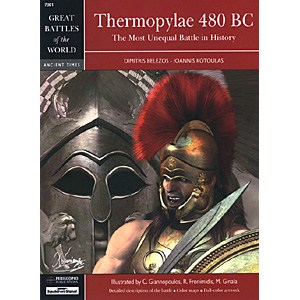 Great Battles of the World; Ancient Times. The Most Unequal Battle in History. The definitive history of the fabled battle at the pass of Thermopylae. For 2 and 1/2 days Spartan King Leonidas lead his 300 along with a contingent of Thespians against the massive Persian army of Xerxes I. In addition to the contest on land, coverage extends to the important naval battle pitting Greek triremes against the Persian fleet at Artemisium, protecting Leonidas’ flank and setting the tone for the decisive Greek victory at Salamis. Symbol of heroic devotion, victory, defeat or senseless sacrifice – this book presents all the facts as never before to define one of the most significant events in Western civilization. Amply illustrated with photos, maps and colour plates to create a panorama of the men, equipment and the world they fought in. Written in Greece and expertly translated to English, includes glossary. Belezos and Kotoulas; 100 pages.