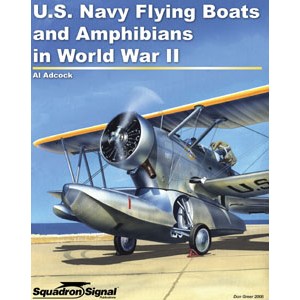 Soon after the early aviation pioneers learned to fly, their attention turned to water. It was more abundant than land and presented a vast landing area. Early American aviation enthusiast and aircraft designer Glenn H. Curtiss redesigned his ‘June Bug’ airplane by adding floats and made his first flight from water in November 1908. Curtiss’ Hydroaeroplane (patented in 1911) opened the door for many types of flying boats and seaplanes. US Navy flying boats, seaplanes, and amphibians provided valuable service in both World Wars, and they continued to serve with the Navy and Coast Guard until the war in Vietnam, when the last P5M Marlin squadron was decommissioned. With nearly 200 photographs, colour profiles and detailed line drawings, this special Squadron/Signal book looks at the various flying boats and amphibians and the contribution they made; Adcock. 80 pages.