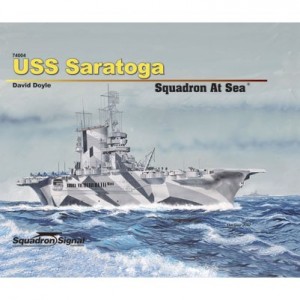 Faced with the restrictions of the Washington Navy Treaty, the US Navy had a choice: either scrap their partially complete, battle cruiser Saratoga, which along with her sister ship Lexington were intended to be the most powerful in the world; or convert them into an aircraft carriers. Wisely, the Navy chose the latter option and created what for many years would be the largest aircraft carriers built.Â  When commissioned in 1927, Saratoga’s decks teamed with fabric-covered biplanes, and the ship and her crew projected US military power far beyond the nation’s shores. So impressive was Saratoga that she and her crew served as a backdrop for two major Hollywood motion pictures. In 1941 she was called to do what she was built for, and for the next four years plied the Pacific, her biplanes replaced by the famed Wildcats, Hellcats, Dauntlesses and Avengers that prosecuted the war against Japan. Having survived two torpedo hits by Japanese subs, as well as repeated bomb and Kamikaze strikes, at war’s end she took part in the huge Magic Carpet operation that transported thousands of US servicemen back to the mainland. Deemed too old for the victorious Navy’s postwar needs, her final duty was to test the survivability of an atomic blast. Still afloat after the first nuclear explosion, she was sent to the bottom of Bikini Atoll by the second of the blasts, and still rests there today, where she welcomes the occasional scuba diver. All these exploits, as well as others, including Saratoga’s numerous refits, are presented and profusely illustrated with 383 color and b/w photos capturing the ship, her crew and aircraft supplemented by 11 line drawings and 25 color renderings; 160 pages.