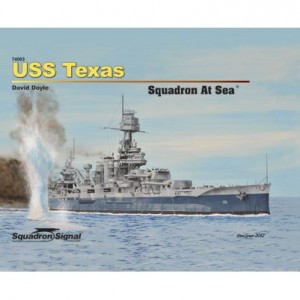 The USSÂ TexasÂ proudly saw combat in both World Wars I and II, and since 1948 has been preserved in her namesake state as memorial to American servicemen. Armed with 10 14-inch guns and displacing 32,000 tons, the battleship is still a formidable sight as she enters into her second century. This massive, 152-page addition to the Squadron at Sea series tells the tale of theÂ TexasÂ and her crew. Over 350 black-and-white and color photos not only showcase the construction, numerous voyages, modifications, combat action, and ultimate preservation of the ship, but also show the vessel as a home, office, and workshop for the men who served as her crew. These historic images are augmented with five line drawings illustrating her key configurations, as well as nine color profile illustrations depicting her aircraft, as well as the many camouflage schemes she wore.

Illustrated with over 350 photographs. 152 pages.