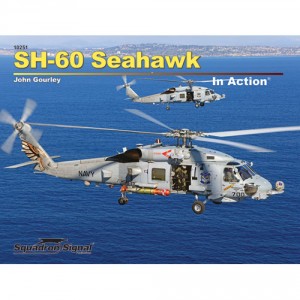 First introduced in the mid-1980s, the U.S. Navy’s Sikorsky SH-60 Seahawk helicopter fulfills a wide range of functions from combat to providing relief to populations stricken by natural disasters. Based on the U.S. Army’s UH-60 Black Hawk, and developed in accordance with the Light Airborne Multi-Purpose System or LAMPS concept of helicopters that extend the search, detection, surveillance, and attack capabilities of ships, the Seahawk family of Navy choppers is distinguished by its hinged tail that facilitates operations from giant aircraft carriers or diminutive destroyers and frigates. The author introduces you to the SH-60F Ocean Hawk with its AQS-13F dunking sonar for detecting submerged vessels, the HH-60H “Rescue Hawk,” that can fly 250 nautical miles from base to perform a rescue and then return to base and which also serves in sea-air-land (SEAL) team operations, the MH-60R “Strikehawk” loaded with sophisticated avionics that facilitate undersea warfare and surface warfare operations in shallow littoral regions as well as deep, blue water ocean environments, and finally the MH-60S “Knighthawk” with its two cabin doors that does everything from aeromedical evacuation and search and rescue to mine countermeasures and special operations transport. Illustrated with more than 260 full-colour photographs, 80 pages.