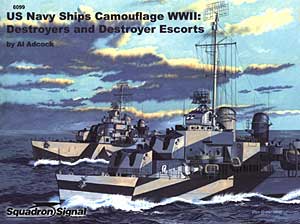 Since the formation of the Continental Navy in 1775, US Navy ships have donned numerous colours. During WWI, when the German U-boat threatened to stop US and Canadian supplies from reaching their European allies, the British Royal Navy began using a splinter-type camouflage to confuse the enemy about the speed, distance, and the course of its ships. The US also adopted similar camouflage during this timeframe. When the Bureau of Construction and Repairs began issuing instructions for different camouflage schemes and colours, the Navy took note, and by WWII, USN destroyers sported several different camouflage schemes that ranged from blue to gray to black and included painted bow waves and multiple dazzle schemes. When WWII ended in 1945, the fleet was restored to Standard Navy Gray to await the next revolution in deceptive paintwork. Illustrated with 116 b/w photos, 2 color photos, and over 30 colour renderings/profiles. 68 pages.