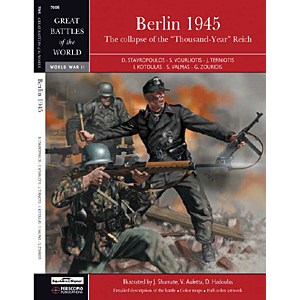 By the dawn of 1945, the Western Allies had driven back Hitlerâ€™s last, desperate effort in the Ardennes. However, the Allies’ insistence on Germany’s unconditional surrender deterred the Germans from making any concession over ending the war – Hitler and the Nazi faithful saw their only option to be a fanatical Wagnerian stand leaving only Germany’s ruins to commemorate the tragedy. Further, it was already clear that another kind of war was right around the corner. The Soviets had already reached Budapest and the Oder River; it was obvious who would dominate Eastern Europe. The only hope for America and Britain to retain what they could of Central Europe was to take Berlin, but the ‘Russian steamroller’ forestalled them. Massive Soviet forces attacked the city in April 1945 – the last act of the confrontation between the Communists and the National Socialists and the first act of the Cold War. Illustrated with color and b/w photographs, color maps, 8 aircraft and 9 armor profiles, and 14 color uniform plates; Stavropoulos, Vourliotis, Terniotis, Kotoulas, Valmas, and Zouridis. Great Battles of the World; 128 pages.