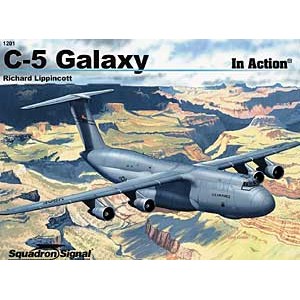 C-5 Galaxy first made its appearance in March 1968 it has been given such varied nicknames as ‘Fat Albert’, ‘Big MAC’, ‘White Elephant’, and ‘FRED’. Almost as long as a football field and as high as a six-story building, the C-5 Galaxy is one of the world’s largest aircraft and the only aircraft that can transport nearly every type of US Army combat equipment, including tanks and helicopters. It’s front and rear cargo doors and ‘kneeling’ landing gear system enables fast and easy loading of bulky equipment, it’s intercontinental range enables it to carry troops and material to any area in the world. Since the 1970s the Galaxy has been projecting power around the globe, taking part in dozens of major military and humanitarian operations. This reprint includes 6 all-new pages packed with color photos and additional information about the Galaxy. Illustrated with 158 photos, 8 color profiles and b/w line drawings. Lippincott; 64 pages.