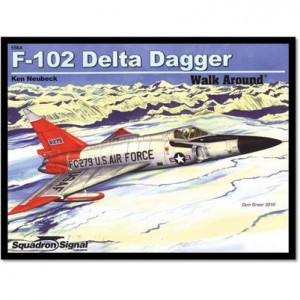 The Convair F-102A Delta Dagger was developed for the US Air Force as a supersonic interceptor at the onset of the Cold War. It featured a 60 degree swept delta wing to lessen drag co-efficient and yield stability at very high altitudes. True to its design, the F-102A made more than 1,000 intercepts of Soviet bombers in defense of Western airspace. Within the US, 22 Air National Guard squadrons were equipped with the Dagger from 1960 until its retirement in 1976. The 102 was also deployed to Vietnam during the war in Indochina, initially to protect bases from North Vietnamese aircraft. Later it flew fighter patrols, escorted B-52s and was used offensively to attack ground installations. Exported to NATO allies Greece and Turkey, the Turks flew the F-102A during their invasion of Cyprus in 1974. After retirement in the US, 152 of the planes were converted to high-speed unmanned drones for use as test targets for newer fighters. Illustrated with more than 200 photographs, plus colour profiles and detailed line drawings; 80 pages.