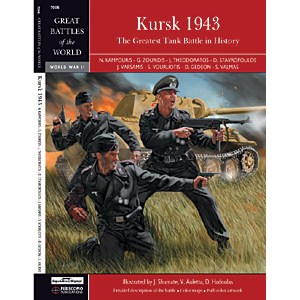 In the summer of 1943, after two years of total war on the Eastern Front, the Germans were ready to meet the Soviets on the decisive battlefield. The greatest tank battle of all time proved to be the beginning of the end for the Third Reich. The elite panzer formations were decimated and would never again regain their former strength. Nothing could turn the fortunes of the war for the Axis and their Soviet flood was not to be stopped until the ruins of Berlin. Illustrated with color and b/w photographs, color maps, 12 aircraft and 18 armor profiles, and 12 color uniform plates. Great Battles of the World; Kampouris, Zouridis, Theodoratos, Stavropoulos, Varsamis, Vourliotis, Gedeon, Valmas, 136 pages.