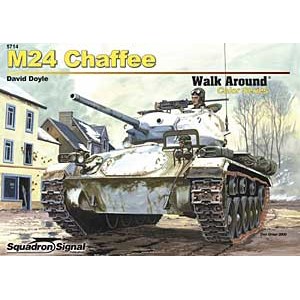 As American-built armor came into contact with Axis forces in WWII – first of all in North Africa – it quickly became clear that the 37mm cannon favored on US armor was simply inadequate against the tough armor of their adversaries. The tall silhouette and slab-sided construction of many US vehicles also demonstrated the need for a new American tank. The M24 was developed in order to address all of these concerns and more. Armed with a 75mm main gun, the Chaffee was able to dispatch many of the foes its predecessors had unsuccessfully faced, and the M24’s torsion bar suspension gave it a lower profile and smoother ride while making it an improved gun platform. Produced for the US military until 1950, the Chaffee continued to take the field around the world until well into the 1970s. Packed with over 200 photos, plus color art and profiles. Doyle; 80 pages.