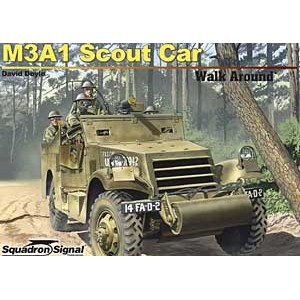 The White Motor Company began serial production of the four-wheel-drive M3A1 Scout Car in 1940. Covered in quarter-inch face-hardened armor, the vehicle served the US military as scout, command car, ambulance and in some cases as a gun tractor. Armed with one .50 caliber and two .30 caliber machine guns on a skate rail that completely surrounded the fighting compartment, the M3A1 saw action in the Philippine tropics, the North African desert and during the 1943 invasion of Sicily. However, US forces soon replaced the open-topped M3A1 with other armoured vehicles that afforded better coverage. Because the vehicle was widely exported it served on – heavily used by the Red Army on the Eastern Front and by Free French, Belgian, Czechoslovak and Polish forces throughout WWII. Later, France took the vehicle into combat in colonial wars in Indochina and Algeria. Illustrated with more than 200 photographs, plus color profiles and detailed line drawings. Doyle; 80 pages.
This book coming into stock in the next few days.