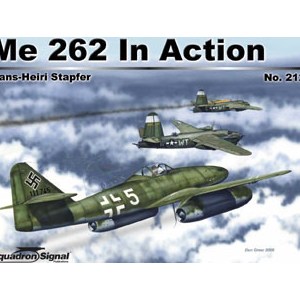 The Messerschmitt Me 262 became the first operational jet fighter in the world. In addition to its Jumo 004 turbojet powerplants, its swept wings were a further innovation that made the Me 262 one of the most extraordinary designs of World War II. The Me 262 A-1a achieved the incredible speed for its time of 497 mph – almost 125 mph faster than the North American P-51 Mustang. The Me 262 not only enjoyed superior speed, but it also had deadly firepower: a total of (4) Mk.108 30 mm cannon were mounted in the nose of the fighter variant. Its operational service, however, was hampered by its temperamental engines and under-strength undercarriage. A total of 1,433 Me 262s were built during World War II. Covers the production and development of the Me 262 with more than 100 photographs, colour profiles, and detailed line drawings; Stapfer. 52 pages.