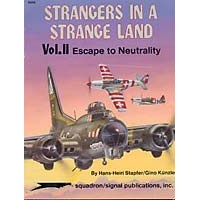 Strangers in a Strange Land, Vol II: Escape to Neutrality (SC). Damaged and often with wounded on board, many USAAF and some German aircraft sought refuge in neutral Switzerland during WW II. The story of the aircraft & crews that landed on Swiss territory during the war years. Over 150 photos, 8 col or pgs. 64 pgs.