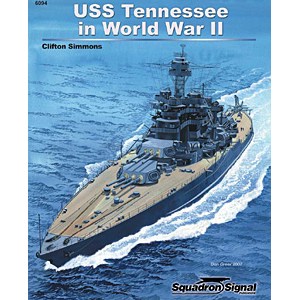 Commissioned in June of 1920, the US battleship Tennessee saw service in some of the most crucial and dramatic battles in the Pacific Theater of WWII. Docked on Pearl Harbor’s Battleship Row on 7 December 1941, her crew manned anti-aircraft guns and fought back as bombs ripped through her deck. Repaired and re-equipped, the battleship saw service off the Aleutian Islands and later in 1943 went into action during the Battle of Tarawa in the South Pacific. The year 1944 saw the Tennessee take part in battle after battle (including Surigao Strait, the last battleship vs battleship action in naval history) as US forces worked their way towards the Japanese Home Islands. In 1945 she took part in the attack on Iwo Jima. Enriched with exclusive, eye-witness accounts from members of her crew, chronicles the dramatic career of one of Americaâ€™s most battle-tested warships with over 200 photographs, color profiles, and detailed line drawings. Simmons; 80 pages.