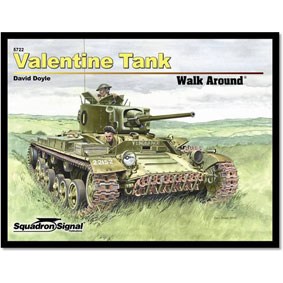 The Valentine Infantry Tank III, a private venture design from Vickers-Armstrong, was the third of Great Britainâ€™s Infantry Tank designs. Though not the first tank to go into battle against the Axis in World War II, the Valentine has the distinction of having the highest production numbers of any wartime British tank, and arguably the most variations. A total of 8,275 Valentines were produced in no fewer than 11 major variations â€“ from Mark I to Mark XI â€“ along with Duplex Drive and other specialized versions. Among the key differences between the various Marks were the engines. Early versions of the vehicle were equipped with gasoline engines, while a Diesel engine powered the later Marks. The turret also saw development during the career of the Valentine, with later models receiving a more elongated turret. The Valentine received its baptism of fire with the British 8th Army in Operation Crusader in North Africa in July 1941. From that date until late 1943, the Valentine was Britainâ€™s primary Infantry Tank. Besides fighting under the Union Jack, Valentines saw action under the flags of Canada, the Soviet Union, Australia, and New Zealand. They took part in combat in both the European and Pacific Theaters, and after the war continued to serve several British Commonwealth armies as late as the 1950s. Illustrated with 250 photographs, plus color profiles and detailed line drawings. 88 pages