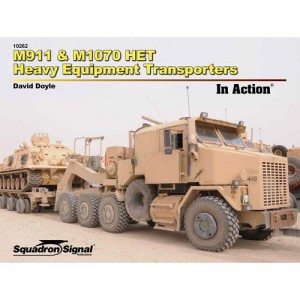 Under the best of circumstance, driving tanks to the battlefield, often called ‘road marches’ are extraordinarily inefficient. Tanks consume vast amounts of fuel, provide relatively poor visibility, and perhaps most importantly, are incredibly maintenance intensive. Driving tanks for hours on end puts a great deal of strain and wear on a number of expensive components (and roadways as well), and repairing or replacing parts worn through road marches puts a great burden not only on the tank crews, but maintenance personal as well. Oftentimes, tanks are not able to travel as rapidly as wheeled transporters, making long movements a slow process. For these reasons, it is common to haul tanks forward. Once in a forward area, tanks that are disabled frequently need to be moved to a rear area for repair. While battlefield recovery is most often done through the use of armoured recovery vehicles, such as the M88, retrieval under less hazardous circumstances is often done by wheeled vehicles, the very same vehicles that are used to transport tanks to the front. For the past several decades, the US Army has relied on two vehicles produced by Oshkosh Trucks (now Oshkosh Corporation) for this duty. These vehicles, the M911 and the M1070, are both massive trucks – as you would expect for vehicles tasked with winching and hauling tanks and other armoured vehicles and heavy equipment at highway speeds. On these pages we will explore the characteristics and use of these vehicles, but the photos on these pages do not fully show the size and robust construction of this equipment. Illustrated with over 220 B/W and colour photos and data tables. 80 pages.