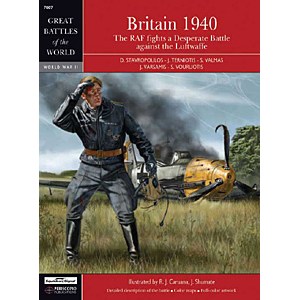 The RAF Fights a Desperate Battle Against the Luftwaffe. Great Battles of the World; Stavropoulos, Terniotis, Valmas, Varsamis, and Vourliotis. The confrontation between Britain’s Royal Air Force and Germany’s Luftwaffe was the first large scale success against Hitler’s aggression, and it is one of the defining episodes in the long history of the British nation. Very inclusive account includes comparison of the Spitfire Mk.I vs Bf 109E, the bombing of London, Operation Sealion, Italian involvement, foreigners in the RAF and the nature and personalities of the opposing commanders. This volume allows the reader to experience the titanic battle as never before: tactics, aircraft, equipment, uniforms, and the men and women who lived it. Enriched with color and b/w photographs (including 10 page Photographic Tribute to the Battle of Britain), color maps, 50 aircraft profiles and 9 color uniform illustrations. A fitting tribute and record of “their finest hour”, 160 pages.