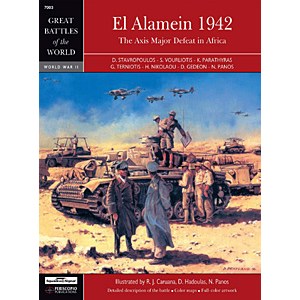 Great Battles of the World; World War II. The Axis Major Defeat in Africa. During the summer the exhausted British forces in charge of conducting the war in the North African desert were in retreat across all sectors, unable to oppose the ‘Rommel phenomenon’. The last obstacle on the road to Alexandria was the British 8th Army, which had finally halted at the isolated El Alamein railroad station after a long, bitter retreat. At this significant spot, the disciplined British troops and their battle-hardened allies, under General Bernard Law Montgomery, prepared to make a final stand. Rommel launched a violent assault, but was unable to overcome his opponents’ stubborn defense. After a bloody 12-day battle, the Africakorps was forced to retreat. The soon-to-be-legendary 8th Army had smashed German dreams of dominating North Africa. Enriched with colour and b/w photographs, colour maps, aircraft and tank profiles and colour illustrations of uniforms. Stavropoulos, Voufliotis, Parathiras, Terniotis, Hikolaou, Gedeon and Panos; 120 pages; English text.