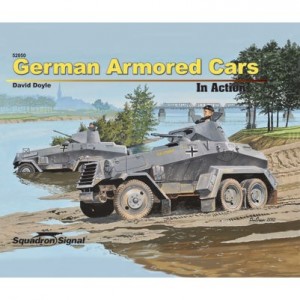 Germany began developing its heavy armored cars well before the outbreak of World War II. Germany’s early six-wheel armored cars were based on 6×4 truck chassis, and their off-road mobility was limited. These vehicles soon gave way to an expanding series of eight-wheel drive/eight-wheel steer vehicles fitted with a variety of armament. In time these too were supplanted by even larger armored cars incorporating refinements based on lessons learned from the vehicles’ field experience, such as heavier armor, armament, and an air-cooled engine. Packed with more than 220 period photographs, this book chronicles the development and deployment of Germany’s six and eight-wheeled armored cars before and during WWII; 80 pages.