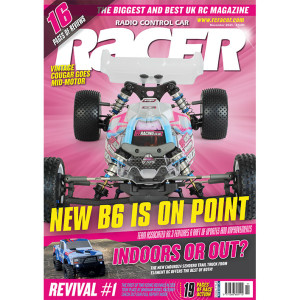 FEATURES
The momentum of the King of Clubs series continued to
gathered at round three and a trip to Colchester in Essex.
The top racers were back for more on-track battles with
Glenn Westwood dominating the 17.5T class with TQ and
the overall win.
30 MURRAY SHOWS TITLE AMBITIONS AT
HALIFAX
The third round of the 2021 BRCA 1:10 Touring Car
National Championships saw the battle for the titles heat
up at Halifax. Whilst in Modified Olly Jefferies continued
his excellent form to date with the Xray, over in Stock
Schumacher’s Andy Murray would secure the round win
and put pressure on Olly’s teammate, Marcus Askell, for
title honours.
34 A CLASSIC MAKEOVER
This month’s Iconic RC Vintage Column is taken over by
Erik-Jan Mol from the Netherlands who guides us through
Dirk Simon’s Schumacher Cougar Mk 1 conversion. Dirk
wanted to make his 1990s 2WD buggy more competitive
for modern racing so decided to convert it into a
mid-motor setup, and enjoyed the help and support of
some notable RC racers along the way.

REVIEWS
THE LATEST THRASH TESTS.
22 TEAM ASSOCIATED B6.3 TEAM
The B6.3 is Team Associated latest platform that features a new
46 ELEMENT RC ENDURO24 SENDERO
The new 1:24-scale Enduro24 Sendero from Element RC, the
42 MARTIN GETS BACK ON TRACK
For the competition, Joni Skidmore had been enjoying
himself at the BRCA 1:8 Off-Road Nationals in 2021 with
two wins from two but as the series headed across to
the popular venue of Herts, Lee Martin finally toppled the
Mugen racer and took the overall victory, although Joni
continued his super consistency with the runner-up spot.
54 CHAPMAN UNBEATABLE AT EARCC
Michael Chapman was in dominant form as the third
round of the MTC Nationals headed to East Anglia Radio
Car Club where he not only took wins in both the Rubber
and Foam classes, but topped the qualifying lists too as
his peers simply had to settle for the lower placings.
58 REVIVAL #1
Such is the success of the annual Revival, and with the
added demands of a pandemic, this year sees not one, but
two of the vintage-only races taking place. The first event
was hosted by Bingham Model Raceway and of course
John Weston was present all weekend not only as the
figurehead of Iconic RC, but also to capture all the action
on and off the race track.
wider rear-end and revised steering components, as well as
many other notable updates to once again ensure the race buggy
remains competitive and durable. Not only do we analyse the
features of the high-grip chassis but we also catch up with Team
Associated drivers, Jamie and Tommy Hall to find out how they
are getting on with the .3 platform.
scale brand of Associated Electrics can be used indoors or out.
From the challenge of a course in the lounge to an outdoor trail,
the sub-£100 model has the capability with its 4WD transmission
with divorced transfer case, metal vertical chassis rails, and
4-link suspension. We tested the Sendero out in a number of
environments to see just what the little crawler could achieve. 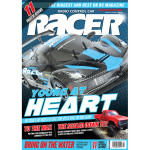 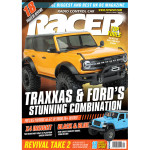 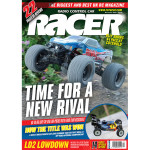