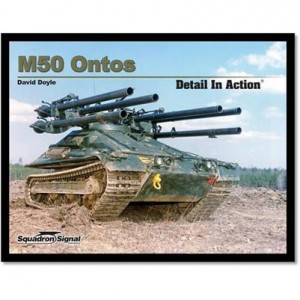 ‘The Thing’ – the meaning of the Greek word ‘Ontos’ is an apt name for this ungainly vehicle. Originally developed for the Army, which then discarded it, the Ontos was instead adopted by the Marine Corps. Conceived as a potent, lightweight, mobile 6-barrel tank killer to counter a feared mass Soviet armored attack in Europe, the Ontos instead rose to fame in the jungles of Vietnam where its six 106mm recoilless rifles proved deadly against massed infantry attacks, as well as being well-suited for urban assault work. This volume incorporates over 60 period photos chronicling the development and use of the Ontos, plus a further 150 detailed walk-around photos providing an in-depth exploration of this unique fighting machine; 72 pages.