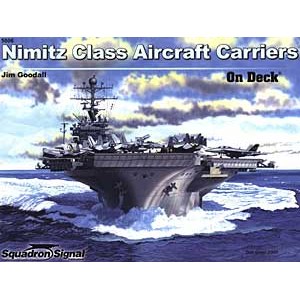 The largest naval vessels in the world are the Nimitz-class super aircraft carriers. The Nimitz (CVN-68) launched the class when it was commissioned on 3 May 1975 and it has been followed by another 9 vessels. Each is more than 1,000 feet long, and displaces 103,000 tons at full load. Carriers are vital to the projection of US power around the globe: USS Nimitz responded to the Iran hostage crisis in the late 1970s, launched raids on Libya in the early 1980s and challenged China’s growing navy in the Taiwan Straits in 1996. USS Dwight D. Eisenhower was the first US warship to respond to the Iraqi invasion of Kuwait in August 1990. USS Carl Vinson was the first to launch air attacks as part of Operation Enduring Freedom in Afghanistan. In the mid-1990s USS Theodore Roosevelt supported NATO air strikes against Bosnian Serbs during fighting in former Yugoslavia. USS Abraham Lincoln backed up Operation Iraqi Freedom and Enduring Freedom in Afghanistan in the early 2000s. Illustrated with more than 300 photographs, plus color profiles and detailed line drawings. Goodall; 80 pages.