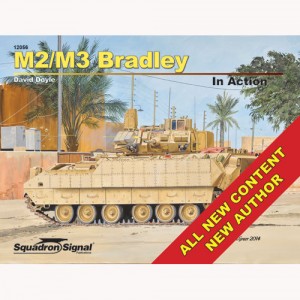 Named for U.S. General Omar Bradley, the armoured M2/M3 Bradley Fighting Vehicle was designed to transport infantry or scouts and was possessed of sufficient firepower to suppress enemy troops and armoured vehicles. Introduced into U.S. military service in 1981 the vehicle was built around the formidable Bushmaster 25mm chain gun mounted in the vehicleâ€™s two-man turret. The vehicleâ€™s three-man crew (commander, gunner, driver) was augmented by the ability to carry an infantry team of seven soldiers in the rear compartment protected by aluminium-alloy armoured skin. Powered by a Cummins Diesel V-8 engine, the Bradley had tremendous automotive performance as well. The M2 Bradley â€“ the original version of the vehicle â€“ was the basis for the M3, also known as a Bradley, a scout vehicle designed for the Cavalry that has the same three-man crew of the M2, but carries only two scouts in the rear compartment. Improvements and armament used on the Bradleyâ€™s such as the TOW and TOW2 are also covered in the volume, whose 80 pages are packed with over 130 photos.
By David Doyle 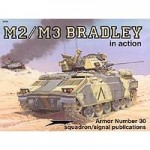