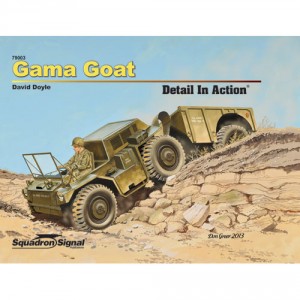 Conceived at a time when the U.S. Army was seeking to revolutionize its tactical vehicle fleet, the Gama Goat showed considerable promise. Deriving its name from its designer, Roger Gamaunt, the Gama Goat was initially a project of aerospace giant Chance-Vought. The all-wheel drive vehicle with steerable axles at each end and a flexible connection between the halves of its two-part body provide agile in testing. The flexibility gave the vehicle sure footing, and the body was designed to be amphibious. Sadly, the production M561 Gama Goats, assembled by Consolidated Diesel Electric, failed to live up to the promise of the test vehicles, leading to a Congressional investigation into both the vehicle performance and cost overruns. Expense modifications and retrofitting delayed the fielding of the vehicle. Troops using these engineering marvels either loved it, or hated it, with seemingly no middle ground. Ultimately, the vehicle saw use with U.S. forces stateside, as well as in Germany and Korea, and the M561 was used during the invasion of Grenada. This 80-page volume chronicles the design, development, testing and field use of this iconic vehicle through 143 vintage color and black-and-white photos, as well as showcasing the nuances of the remarkable design via 74 colour photos of immaculately preserved examples. Illustrated with over 200 photographs. 80 pages.