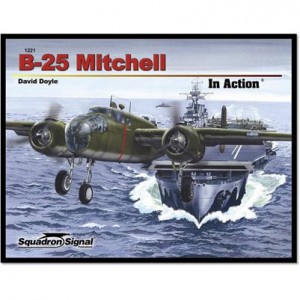 The North American B-25 Mitchell was one of the premier US warplanes of WWII. It gained immortality early in the United States’ involvement in the war when a small group of B-25s under Lt. Col Jimmy Doolittle took off from the deck of the USS Hornet and executed a surprise attack on military targets on the Japanese island of Honshu. Subsequently, Mitchells would see service in every US theater of war, doing duty as a tactical bombers, coastal patrol aircraft, photo-reconnaissance and photo-mapping planes, and, when fitted with additional guns and rockets, as superb ground-or shipping-attack platforms. The US supplied B-25s to the British Royal Air Force and to the Soviet Union, which flew them against the Nazis on the Eastern Front. Through period photographs and detailed information, the career of the Mitchell is covered from the experimental NA-40 prototype to the final production B-25J model. US Marine Corps PBJ versions are also chronicled. Illustrated with nearly 200 photographs, more than 80 of them rare period photos in original color, plus color profiles and detailed line drawings; 72 pages.