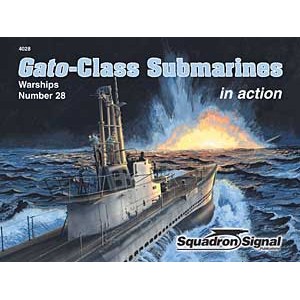 American submarines were a decisive element in winning WWII in the Pacifiic accounting for more than half of the nearly 10 million tons of Japanese naval and merchant shipping lost during the war, while also carrying out such other important duties as pilot rescue, reconnaissance and espionage. The burden of the submarine war from 1942 until victory in 1945 was borne by the US Navy’s Gato-class submarines (including Balao and Tench variants). Many of these subs continued to serve after receiving postwar refits in the US and foreign navies. More than 100 b/w photos, 6 color profiles, line drawings and color covers. Updated with an additional 20 color photos and up-to-date information on where the surviving vessels can be viewed. Stern; 56 pages.