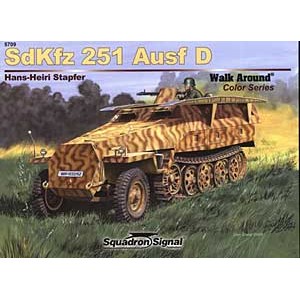 Considered the German Armyâ€™s most important armoured half-track in WWII, the Sd.Kfz.251 allowed the infantry to keep up with the Heer’s fast armoured elements. The vehicle came in 4 models and 23 variants, but the Ausf.D was the most produced model. In fact, Ausf.Ds represented nearly 70 percent of Sd.Kfz.251s built during wartime. The type’s simplified design was the main contributor to this variant being produced in such substantial numbers, and the Ausf.D was the first of the 251s to have stowage bins built into the sides of the half track. This mass-produced, streamlined vehicle truly proved its worth in WWII and saw action on every front. Illustrated with over 150 colour photographs, detailed line drawings, and 8 colored profiles. A must have book for the armour, modelling, history, and military enthusiast. Stapfer; 80 pages.