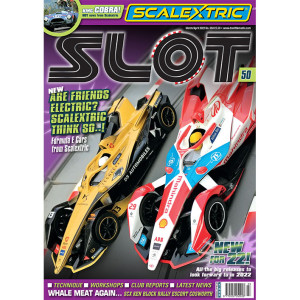 14 Collecting AC Cobra
The Anglo-American sports car has been around since the
early days of slot car racing. We trace the history of Carrol
Shelby’s masterpiece from the 1960’s, up to today.
24 Slotcar Dreams
We look at a wonderful piece of work from Dutchman
Dennis Vos who traces his collection and circuits he enjoyed
with his two sons.
30 SRM History
While looking into the development of Super Shells in the
last issue we uncovered another British company that
paralleled what the Harpenden company was doing. Tony
Condon helps join the dots.
34 B UM Slot
Nobody would call their company that – would they?
Seriously? Well, there was a company called Barcelona
Universal Models. We give one of their models a makeover
even though just 100 were ever made!
42 Ken Blocks Escort
Most of us would have seen Ken Blocks exploits on
YouTube and on TV, right? So, when SCX decided to bring
back their Escort Cosworth it was in the guise of one of
Blocks rally cars based on the fast Ford.
46 25 Years Young
Fly Car Model of Madrid celebrated their Silver Anniversary
in style at the Jarama race circuit just north of the Spanish
capital.
50 Ma rks McLaren
Regular contributor to Slot Magazine Mark Hatton, shows
us what he did to a MR Slotcar McLaren F1 GTR white kit.
54 Th e Electric car cometh
While most petrolheads will hang on to the internal
combustion engine for as long as possible there is now a
generation embracing electric racing cars? Well Scalextric
certainly embraces this new technology.
61 Slot Magazine Goes Racing in the US!
Yes we a proud to be sponsors of a slot car championship
being held in the North East of the US this spring.
Check out dates and rules on page 61
62 Keep on Trucking
Here we have a selection of vans and trucks built using
mostly the resin shells of George Turner, by Mulsanne
Models Rodney Grant. 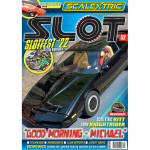 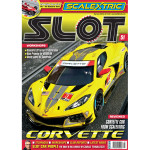 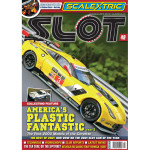