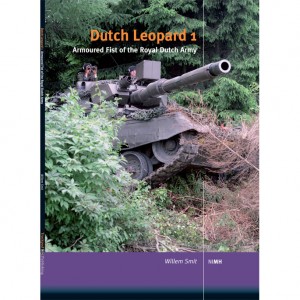 Dutch Leopard 1 â€“ Armoured Fist of the Dutch Army
Michael Shackleton, author of the Leopard 1 Trilogy, is the man behind the project.

About the book
At the end of 1969, the first of 468 Leopard 1 tanks from the German manufacturer Kraus-Maffei were transferred to the Royal Dutch Army. The Dutch cavalrymen had waited anxiously for this new, reliable and above all, mobile tank which would partially replace Centurion.
The superiority of the Warsaw Pact saw NATO forced to act in a mobile fight. In the eighties, the Leopard underwent an extensive improvement involving the military, the press and politics. After the fall of the iron curtain, and after twenty years of service, the end came for this defining tank within the Dutch Army. With hindsight, did the Leopard 1 meet its high expectations? We must be honest and say the answer is no. Why? Read the book and all will be revealed!

The author, Willem Smit, affiliated with the Netherlands Institute of Military History, pays tribute to the operational deployment of this battle tank and also focuses on the development, testing, troubled service and phasing out of the Leopard 1 tank. Armoured Fist of the Royal Dutch Army is a richly illustrated book, accessible to both the uninitiated, the modeller and the enthusiast.

This book was first published in 2008 in the Dutch language. The original book is now out-of-print and difficult to find, especially outside it’s country of origin. This expanded English-language edition adds some new information and photos in a redesigned format.