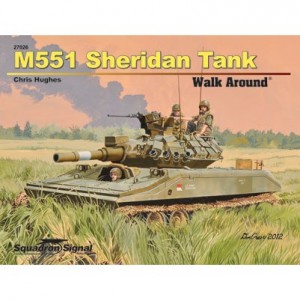 First deployed in combat in Vietnam, the M551 Sheridan is the first U.S. tank to be fully amphibious and also airborne capable. Though maintenance problems and issues with the gun-launcher system caused the M551 to be withdrawn from most active Army units in the late 1970s, it continued to serve the 82ndÂ Airborne Division as the only armored vehicle in the Armyâ€™s inventory that could be air dropped. With the 82nd, the Sheridan took part in the U.S. invasion of Panama in 1989 and in the war against Iraq in 1990-1991. The last M551s were withdrawn from U.S. service in 2003. Based on photographic studies of various M551s, volume offers readers the first-ever up close look at the Sheridan. Coverage of the basic M551 begins with the suspension and works its way around the exterior of the tank, into the engine compartment and finishes with a detailed look at the vehicleâ€™s interior. Photos of the sub-variants of the M551 Sheridan, such as the â€œProduct Improvement Program,â€ A1, and VISMODs round out this profile of the versatile historic tank. Illustrated by more than 240 photographs plus eight detailed line drawings. 80 pages.