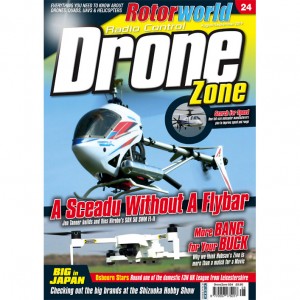 Features
10 Osbourn At Number One
Contest director Julie Fisher reports back from the first
round of this year’s F3N UK League that was hosted by
The Gliding Club in Leicestershire that saw a win in the Pro
Class for defending champion, Duncan Osbourn
24 Speed Freaks
Michel Maisons takes a look at the various different designs
helicopter manufacturers have come up with as they try to
improve on their performance in terms of both range and
outright top speed
48 Futaba CGY760R
The R is the latest iteration of Futaba’s CGY760 unit that
combines a receiver, head speed governor and three-axis
heading-hold gyro in one. Tim DiPeri, with the help of top
Futaba pilot Nick Maxwell guide us through the details
52 Shizuoka Hobby Show
With brands such as Futaba, Hirobo and other home-based
manufacturers present, the annual show in Shizuoka, Japan
offers the chance to see their latest releases

Reviews
14 Hubsan H117S Zino
This new foldable quadcopter from Hubsan represents
amazing value for money, coming in at less than a third the
price of the DJI Mavic ranges. The folding design makes it
convenient and compact, and comes with a 4K camera that
Shaun Garrity put through its paces
36 Hirobo SDX 50 SWM FL-II
This is the latest Sceadu model from Hirobo running on nitropower
that benefits from a number of updates, yet remains
true to the brand’s heritage in terms of build quality, looks
and flight performance
44 DJI Smart Controller
To improve performance and maximise potential, owners of
a Mavic 2 or other aircraft equipped with OcuSync 2.0 can
use DJI’s new Smart Controller that features a 5.5-inch builtin
screen for clear and bright images even in challenging
conditions. Tom Stacey grabbed his Mavic 2 Zoom and
headed straight to the local flying field 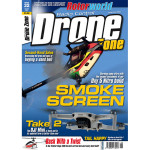 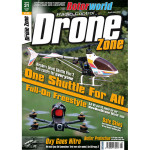 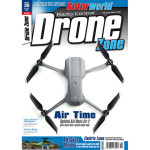