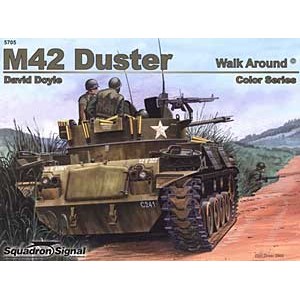 The US Army began accepting deliveries of the M42 in October 1952, when production ended in 1959, approximately 3,700 units delivered. By the late â€™60s, the Dusterâ€™s limits seemed to have been reached. The lack of radar tracking system meant the M42 was a ‘fair weather’ shooter against low, slow targets; it just could not keep pace with the new generation of Soviet jet aircraft. As American involvement in Vietnam increased, 3 battalions of Dusters were sent to South Vietnam – initially for anti-aircraft duties, but with clear skies over the South, the M42 was usefully employed as convoy escort, perimeter and base security, and direct fire support. This book takes a detailed look at the M42 Duster with more than 200 photographs, colour profiles and detailed line drawings; Doyle. 80 pages.