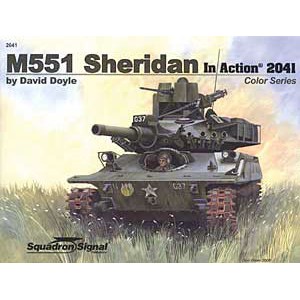 Beginning in 1966, the Allison Division of General Motors built 1,562 M551s with primary armament being a 152-millimeter gun/launcher capable of firing conventional ammunition or the Ford-built Shillelagh anti-tank missile. The Sheridan was indeed a unique vehicle that served the US Army over 3 decades. While it was conceived as a light Armoured Reconnaissance/Airborne Assault Vehicle that had both amphibious and airborne assault abilities, the casual observer, and most in the military, saw the M551 Sheridan as a tank. Whatever the conception, this vehicle proved an asset to the Army in Vietnam, Panama, and Operation Desert Storm. With a 4-man crew, this 6-cylinder Detroit Diesel engine-powered vehicle, though retired, has yet to be replaced by a more suitable military asset. Illustrated with 91 color photos, 8 b/w photos, 7 color profiles, 3-view drawing, vehicle development illustrations, and 2 colorized camouflage patterns; 60 pages.